This book offers a new critical perspective on the weird that combines two ways of looking at weird and cosmic horror. On the one hand, critics have considered weird fiction in relation to aesthetics – the emotional effects and literary form of the weird. On the other hand, recent scholarship has also emphasised the potential philosophical underpinnings and implications of weird fiction, especially in relation to burgeoning philosophical movements such as new materialism and speculative realism. This study bridges the gap between these two approaches, considering the weird from its early outgrowth from the Gothic through to Lovecraft’s stories – a ‘weird century’ from 1832–1937. Combining recent speculative philosophy and affect theory, it argues that weird fiction harnesses the affective power of disgust to provoke a re-examination of subjectival boundaries and the complex entanglement of the human and nonhuman.

‘Jonathan Newell’s rigorous analysis reveals how weird fiction has anticipated and influenced important movements in contemporary philosophy. This book offers striking new critical insights, giving a fresh perspective on Lovecraft as well as illuminating critically-neglected writers such as William Hope Hodgson. Newell writes with depth, sensitivity and flair, and A Century of Weird Fiction is sure to become a key text for scholars working across Gothic and Horror Studies, as well as those with an interest in contemporary philosophy.’
-Dr Chloé Germaine Buckley, Manchester Metropolitan University

‘This book is “disgusting” in that word’s etymological sense: it “turns” our “taste” toward the affective disruptions of human life. Newell moves among classical and contemporary philosophy, canonical and contemporary weird fiction, theory and close reading, to articulate precisely the sliminess of our being. A critical tour de force!’
-Emeritus Professor Steven Bruhm, Western University, Canada

'A Century of Weird Fiction, the latest in UWP’s excellent “Horror Studies” series, aims to bridge the gap – or better, show that no gap ever existed, at least in the works of weird fiction’s major practitioners.'
- Rue Morgue, Dejan Ognjanovic

'I found A Century of Weird Fiction to be an excellent and fascinating piece of work that brings a fresh position to the often repetitive world of weird criticism. Do I now believe that disgust is the core of all weird fiction? I’m personally undecided but it is an unpleasantly attractive argument and Newell has certainly been successful in his state aim of seeking to “articulate philosophical insights gleaned from the festering tongues of too animate corpses or the hungry, myriad mouths of hybrid abominations”.'
- Review by Daniel Pietersen, Sublime Horror https://www.sublimehorror.com/books/a-century-of-weird-fiction-1832-1937-by-jonathan-newell-review/

‘The disgust precipitated by weird fiction emanates from a specific source – the non-human world, what philosophers have called the world-in-itself. This book interprets the weird as a speculative and affective negotiation of the real, in its most elemental sense.’

Read more about A Century of Weird Fiction on page 21 of the Booklaunch https://bit.ly/30VXFM4

Jonathan Newell is an Instructor at Langara College in Vancouver, British Columbia. His research focuses on aesthetics and metaphysics in weird fiction, horror and the Gothic. 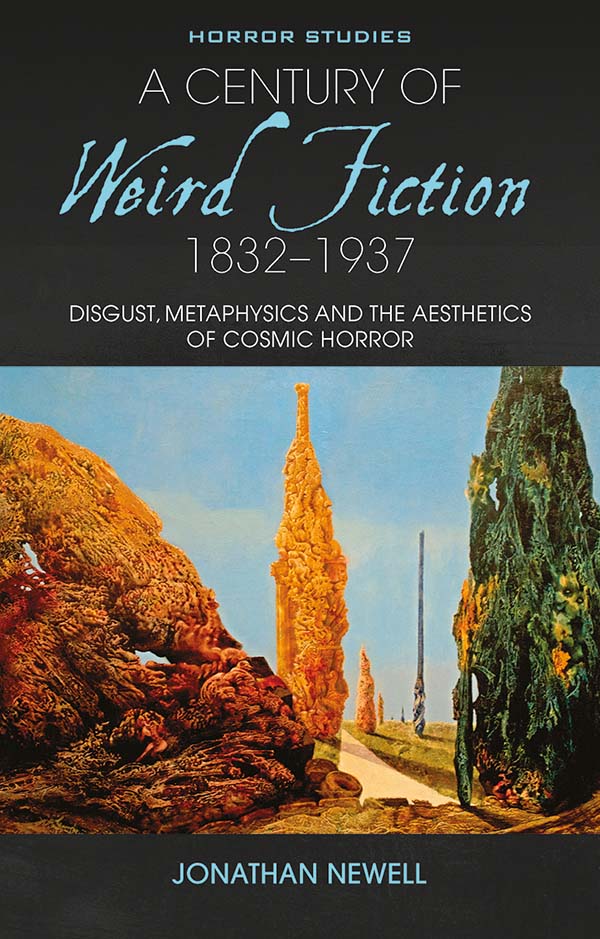