Any attempt at comparing contemporary change in the UK and France is a bold one, since it means discussing two very different countries with strong distinctive constitutional identities. This book places its emphasis on the shared historical, political and cultural background of the UK and France, before focusing on the sweeping transformation of their constitutional frameworks in the past quarter of a century at a national and regional level – with a particular emphasis on Wales and Scotland – which culminated in the June 2016 referendum on Britain’s EU membership. Instead of examining each country separately, however, as is traditional, this study breaks new ground by explaining the pattern of institutional development in Britain and France from a comparative Franco-British perspective. It explores the complexities of recent constitutional change in both countries in an original and comprehensive way, and gives both British and French readers a deeper understanding of the two countries that have some much in common even though Brexit could drive them apart.

‘“Comparison illuminates” – this is an absolutely indispensable book for UK, French and comparative constitutional scholars, as well as all those concerned with the present and future politics of each country and Europe as a whole. Elizabeth Gibson-Morgan’s shrewd analysis identifies and explains the key differences in the political and constitutional practices of the two countries and the common challenges they face in the years ahead.’
-Professor Robert Blackburn, King’s College London

Chapter 3: Emancipating and reforming Parliaments in France and the United Kingdom
1-Rationalised parliamentarianism: its decline in France and its emergence in Britain
2-Reactivating conventions and constitutional practice in French and English parliamentary law
3-Reviving bicameralism in the United Kingdom and France
3.1-Undemocratically elected, yet more legitimate, second chambers
3.2-The House of Lords and the French Senate as counter-powers and custodians of freedoms and stability
4-Revisiting the myth of the non-reform of the Senate and the House of Lords
4.1-The abolition of the hereditary principle and the end of a structural conservative majority
4.2-The shorter more democratic mandate of French senators and a better representation of urban constituencies
5-The election process of French senators partly based on PR and the failed attempt at introducing a form of PR in the UK Parliament
5.1-A French Senate-type upper-limit as a potential solution for an ever-growing Lords
5.2-Failed attempts at introducing PR in the French National Assembly and in the Commons
6-Strengthening parliamentary control over the Executive
6.1-French ‘Questions to the Government’ and Prime Minister’s Questions in the UK
6.2-French and British committees as the cornerstone of parliamentary life

1-Asserting the unity of the English judiciary compared with the French division of courts
2-Strengthening the independence of the judiciary in England and France
2.1- A formal separation between the judiciary and the legislature with the Constitutional Reform Act (2005)
2.2-The development of constitutional justice in France
2.3-The President of the Republic in France, the Lord Chancellor and Secretary of State for Justice as guarantors of the independence of justice
2.4-French judges as symbols of the Republican Law, British judges as Her Majesty’s judges
2.5-The lack of diversity in the Higher Judiciary in the UK and in France
2.6-The importance of local justice in the UK and in France with the Lay Bench
3-Human rights under threat: A French state of emergency and British inroads into civil liberties
Chapter 5: Devolution in the United Kingdom, a decentralisation process in France
1-Piecemeal territorial reforms in France and the UK: common trends and patterns
2-The origin of contemporary devolution in the UK and decentralisation in France
2.1-The 1982 and 1983 decentralisation or Deferre Laws: a minimalist form of devolution
2.2-The Kilbrandon Report (1973) as the catalyst for devolution in the UK
3-The legal framework: no clear division of competences
3.1-The French general competence clause and British transfers of competences to separate devolved governments
3.2-A reserved-powers model for Scotland, a conferred-powers model for Wales
3.3-Abolishing French régions or départements: a permanent dilemma
3.4- Pressing for more decentralisation in France and more devolution in the UK
4-The financial framework: devolved administrations’ and territorial communities’ limited fiscal responsibility
5- The way ahead: a revisited Union and a more diverse Republic
Chapter 6: The European Dimension: France and the UK, Partners in Europe
1-War powers and parliamentary consent in France and the United Kingdom
2-A tradition of human rights in common within the Council of Europe
3-Constitutional issues triggered by a common EU membership
4-The 2005 French referendum on the European Constitution and the 2016 referendum on the UK’s EU membership

Elizabeth Gibson-Morgan is Professor in Law and Languages at the University of Poitiers and at the Bordeaux Law School. She is a Visiting Senior Research Fellow at King’s College, London. 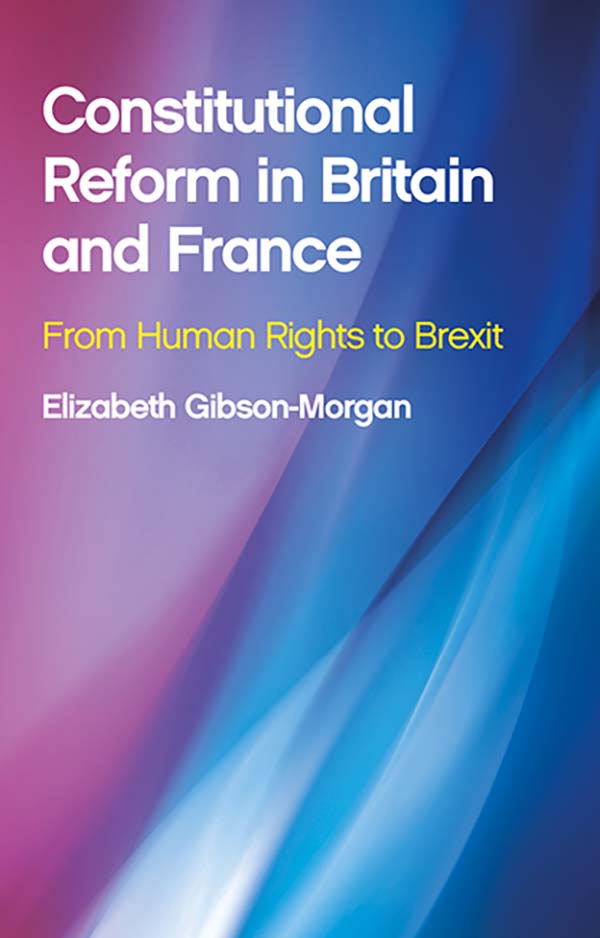