This book describes the long-term four billion-year context of anthropogenic climate change, and seeks to explain our inability to respond positively to its challenges. It argues that the availability of energy and the consequential capacity to do work and exert power has, over this time, defined the trajectory of life on planet Earth as well as many of its physiochemical characteristics. Six major historic energy revolutions are recognised – energising of the first living cell; harvesting the Sun’s energy; emergence of complex eukaryotic cells; hominid use of fire/cooking for brains not brawn; agriculture, more food and urban life; fossil fuel bonanza and the industrial revolution – and we are now in the midst of the seventh revolution, responding albeit reluctantly to anthropogenic global climate change.   'Given the huge inequalities in wealth and lifestyle, the energy and consequently CO2 footprints of the jet-setting elite from any country must be at least double, probably, treble, the mean, even the ‘rich’ countries. Energy use permeates all aspects of modern life. This is supplied largely by burning fossil fuels. Regrettably, it appears that the non-catastrophic-resolution of one of humanity’s gravest problems, global warming, is made more difficulty by nature of the homeostatic mechanisms that have historically modulated human behaviour.' - Read more about this on page 14 https://www.booklaunch.london/issue-6

‘R. Gareth Wyn Jones offers a distinctive perspective on the evolution of life and civilization. He links the key transitions – from the emergence of life to our present civilization – to the enhanced availability of energy, and he argues that sustaining planet Earth as a viable home for humans and every organism with which we share it is surely the greatest project ever contemplated. One can learn a great deal from this wide-ranging book.’
-Professor Lord Martin Rees, FRS, Hon. FLSW. Astronomer Royal, former President of Royal Society

‘Energy drives everything, says R. Gareth Wyn Jones, and in this magnificent integration of science and history he shows how all forms of life have had to adapt to the consequences of their own energy consumption. The present consequences are as alarming as at any time in our planet’s history – and anyone who wants to understand them should read this powerful book.’
- Professor Ian Morris, Willard Professor of Classics, Stanford University

‘This beautifully written book is an important contribution to the analysis of the consequences of climate change by an experienced and widely travelled biologist. His treatment of the role of agriculture, and the problems faced by humans in arid lands, are outstanding. The Prologue alone is exemplary, and induced me to delve more deeply into this meticulously researched text.’
-The late Professor Sir John Meurig Thomas FRS, FLSW, former Director of the Royal Institution of Great Britain and Master of Peterhouse, Cambridge

‘Life depends on the transformation of energy. From this premise, R. Gareth Wyn Jones takes us on an exhilarating journey through 4 billion years of life on Earth, relating energy to major evolutionary transitions, biotic changes to the environment, the agricultural and industrial revolutions, and solutions to current anthropogenic environmental changes.’
-Emeritus Professor John Raven, FRS, FRSE, University of Dundee.

‘Seven encyclopaedic, linked, interdisciplinary chronicles tell the billion-year energy story in Wyn Jones’s essay. Energy propels economic expansion and political power; ’tis known. What to do when our use of energy brings us to imminent threat? Can we possibly find clues to a forward path in the discipline which limits the energy-seeking behaviour of cells? Read on …’
-Margaret Catley-Carlson, former Chair Global Water Partnership; World Economic Forum Water Agenda Council

‘R. Gareth Wyn Jones takes us on a voyage of discovery that starts before the origins of life and moves through six major energy steps. Along this journey, his beautifully researched and fascinating text knits together a vast array of topics ranging from cell biology to human psychology. Following the unifying themes of energy and homeostasis, his journey leads us headlong to the very brink of the current climate crisis. Let us hope that this long-and-unifying view might help us all understand both the naturalness and the utter urgency of our current moment.’
-James Intriligator, Professor of the Practice (Human Factors, Engineering and Design), Tufts University, Boston

‘A fascinating tour through the history of energy use on our planet – and a sobering reminder that we have very little time to make very big changes in how we think about and interact with our planet.’
-Bill McKibben, author of Falter: Has the Human Game Begun to Play Itself Out?

'His wide ranging and novel approach provides a great deal of cause for thought, and some reasons to consider that people may yet survive to a favourable future. He starts from the hypothesis that energy enables work and power, which leads to ordered complexity. This is set in the context of the development of life on earth. Unless there are some specific stabilising mechanisms, organisms, and communities of organisms, would be short lived. The book has some useful notes, a strong list of references and an index. It would be valuable as a basis for seminars to senior students in school and university across a range of subjects'.
- John C. Bowman, FRSB, The 'Biologist', Royal Society of Biology

'Thank you very much for sending your Energy: The Great Driver. It leaves me thoroughly envious of your ability to summarise and clarify a great diversity of topics while integrating them elegantly in a very persuasive unifying framework. I look forward to returning to it often. Everything you say makes sense. You drew some attention to the way that social emotions underlying tribal thinking contribute to human difficulties with solving longterm problems, but you did not elaborate much. But of course that could have doubled the length of your book... so it is not a criticism so much as a hope that you might think about including maleness into further writing, It would be a terrific reading for the right kinds of undergraduate course as well.'
- Professor Richard Wrangham, Department of Human Evolutionary Biology, Harvard University

Click on the below link to listen to R. Gareth Wyn Jones discuss 'Energy, the Great Driver: Seven Revolutions and the Challenges of Climate Change' at the St Davids Festival of Ideas
https://bit.ly/2PiPO9k 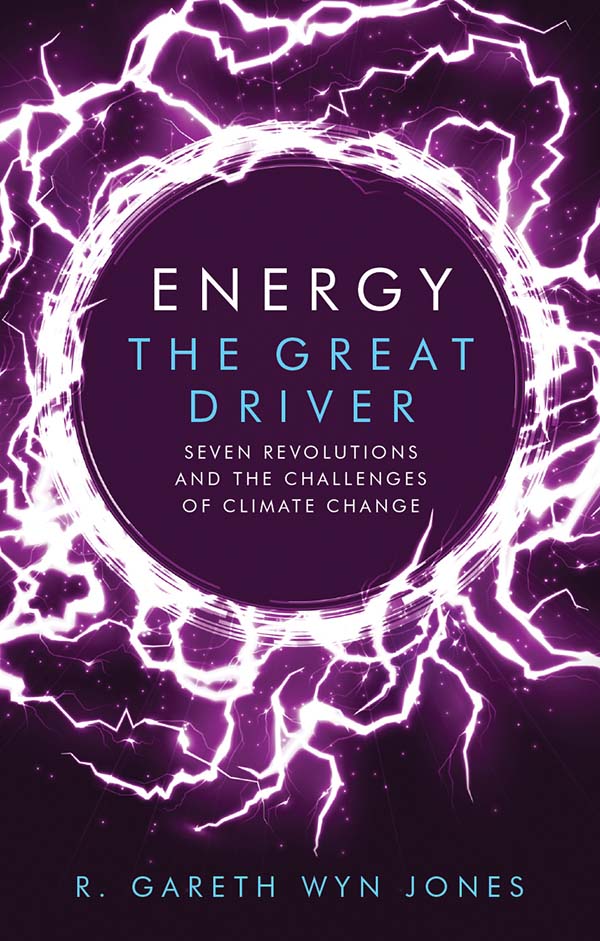