The Brexit debates confirmed how Wales’s relationship to Europe has for too long been discussed exclusively, narrowly and suffocatingly in terms of its social, political and economic aspects. As a contrast, this volume sets out to explore the rich, inventive and exhilarating spectrum of pro-European sentiment evident from 1848 to 1980 in the writings of Welsh intellectuals and creative writers. It ranges from the era of O. M. Edwards, through the interwar period when both right wing (Saunders Lewis) and left wing (Cyril Cule) ideologies clashed, to the post-war age when major writers such as Emyr Humphreys and Raymond Williams became influential. This study clearly demonstrates that far from being insular and parochial, Welsh culture has long been hospitably internationalist. As the very title Eutopia concedes, there have of course been frequently utopian aspects to Wales’s dreams of Europe. However, while some may choose to dismiss them as examples of mere wishful thinking, others may fruitfully appreciate their aspirational and inspirational aspects.

‘An encyclopaedic knowledge of Welsh intellectual life since 1850 informs this account of the visions of Europe – from radical right to Gramscian left – found in the work of leading writers. Beyond internal differences, it detects a common strategy for survival and a persisting need to place ourselves within Europe.’
-Ned Thomas, founder of Planet: The Welsh Internationalist

‘Eutopia is a magisterial survey of the European dimension of Welsh literature over centuries. It traces the different European influences on Welsh writers and the intrinsic internationalism of Wales, not contradicted by a passion for the nation and its languages. It illuminates Welsh history throughout the better to help us understand ourselves – and it shamed my ignorance of so many things that I wish I had known and understood.’
-Sir Emyr Jones Parry, former Permanent Representative of the United Kingdom to the United Nations

‘A brimming, generous book ... It will be difficult now for anyone to approach any aspect of Welsh culture having read it without hearing a still small voice whispering, “Yes, but what about Europe?”’
-Dr Robin Chapman, Aberystwyth University

'This timely study demonstrates convincingly how, for a century and a half and more, important Welsh writers and intellectuals have dreamt of belonging to a mainstream European culture. It is clearly based on a huge amount of reading, research and thoughtful reflection, their fruits distilled into a lucid and readable narrative certain to appeal to a wide cross-section of disparate readers.'
- J. Graham Jones, Gwales

'Eutopia: Studies in Cultural Euro-Welshness, 1850-1980, is an attempt to ‘put paid, once and for all, to the tired, clichéd view of Welsh culture as insular and parochial.’ It does so by exploring a veritable genealogy of writers and thinkers who spent time in Europe or were variously inspired by aspects of its culture... One of the most striking images in the book comes in an account of Saunders Lewis’s translation of Dante’s Inferno in which ‘the would-be redeemer of Wales who had supposedly reappeared in ghostly form to the abbot of the monastery of Glyn y Groes, only to be sadly told that his return had been premature, as Wales was not ready to follow him.’ '
- Review by Jon Gower, Nation.Cymru. Read the full review here https://nation.cymru/culture/review-eutopia-is-peppered-with-fascinating-vignettes-of-welsh-europeans/

Series Editors’ Preface
Epigraphs
Preface
Introduction
1 The Europe of Welsh Nonconformity
2 The Welsh Whig Version of Europe
3 The Little Five-Foot-Five Nations
4 The Europe of the Cultural Right
5 From Spain to Scandinavia
6 Europe, West to East
7 The Female Europa, the Rhondda Europeans and Welsh Symbolism
8 Surrealism, the War and After
9 Onwards Towards Union
Index 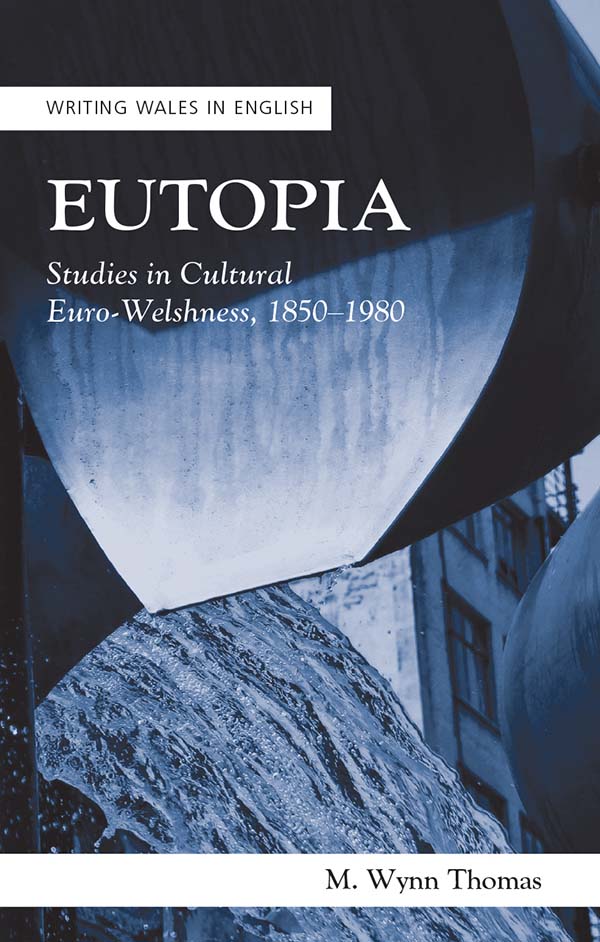