This book presents the life and work of Professor Evan James Williams, described as one of Wales’s most eminent scientists. Williams played a prominent part in the early twentieth-century revolution in physics with the emergence of quantum science, and was an able experimentalist and accomplished theoretician who made notable contributions in atomic physics and the discovery of a new elementary particle. From humble beginnings in rural Cardiganshire, his stellar career is charted in this book as he climbed the academic ladder at a number of universities, culminating in his appointment as Professor of Physics at Aberystwyth, and election to a Fellowship of the Royal Society. During the Second World War, Williams was instrumental in applying Operational Research to thwart the threat of German submarines in the Atlantic; his career was cut short, however, by his early death in 1945.

‘This excellent book captures the reality and excitement of being a talented young scientist at the heart of one of the great discoveries of the twentieth century – unravelling the structure of the atom and the nature of matter itself. The immense international effort that spanned the two decades after the Great War is vividly described through the part played by the remarkable experimental physicist and Welshman, E. J. Williams – as is the total change of direction when another war arrives and a tragic end that begs the question “if only ...?”’
-Professor Emeritus Deri Tomos FLSW, Bangor University

‘This important book paints a vivid picture of an extraordinary man, and also presents a fascinating account of Williams’s brilliant scientific and wartime achievements. It is a most welcome addition to this excellent series. Williams’s stunning legacy is intact. This is a must-read volume.’
-Professor Michael Charlton, Professor of Experimental Physics, Swansea University

‘In a meticulously researched book, Rowland Wynne details the remarkable scientific achievements of the tragically short but still highly productive career of the physicist Professor E. J. Williams. A distinguishing feature of the book is its insight into the personal lives of both Williams and the leading physicists with whom he collaborated in an era of rapid advances.’
-Professor K. Alan Shore, Bangor University

‘A brilliant account of the life of one of the greatest scientists of his time. This book captures the excitement of the most important period in the development of modern physics, which is explained in an understandable and thoroughly absorbing way.’
-Professor Sir Robin Williams CBE, FRS, FLSW, former Vice Chancellor of Swansea University

‘Evan James Williams was one of Wales’s finest scientists, who made key contributions both to fundamental physics and the war against Hitler’s submarines. Rowland Wynne’s volume vividly portrays the scientist and his work, providing a definitive biography for this remarkable man.’
-Professor Geraint Vaughan, Professor of Atmospheric Science, University of Manchester

‘The tale is very well told in the original Welsh and adorned by the English translation. The text is replete with charming and insightful recollections of the professional interaction between Williams and his colleagues, as well as casting light on aspects of his engaging personality.’
-Neville Evans

‘Williams later made measurements comparing the momentum of an absorbed X-ray with the momentum of the released photoelectron. This time, the experimental results did not agree with those predicted on the basis of the ‘old’ quantum theory, thus raising new questions.’ Read an extract of Evan James Williams in the Booklaunch on page 7. https://edition.pagesuite-professional.co.uk/html5/reader/production/default.aspx?pubname=&edid=3ade3724-d3c8-4c1e-abdb-894ec37b05fc

'Independent scholar Rowland Wynne’s account of the life of this brilliant and gifted scientist needs must explain the physics along the way and he does so with clarity and concision, so that the general reader gets at least a basic understanding of the complexities of such theories as the so-called Bragg-Williams order-disorder model, which explains what happens when alloys of metal are cooled or heated. It also depicts a new world order in physics, aided by the creation of cyclotrons, the discovery of new sub-atomic particles and an understanding of cosmic rays and one where new ideas about black holes appeared even as the Manhattan project put atomic energy to destructive effect.'
- Jon Gower, Nation.Cymru https://nation.cymru/culture/review-evan-james-williams-atomic-physicist-is-testament-to-the-power-of-thought/

Rowland Wynne is an independent scholar, who has a background in physics; his interest in Evan James Williams was kindled by a visit to the Niels Bohr Archive at the University of Copenhagen. 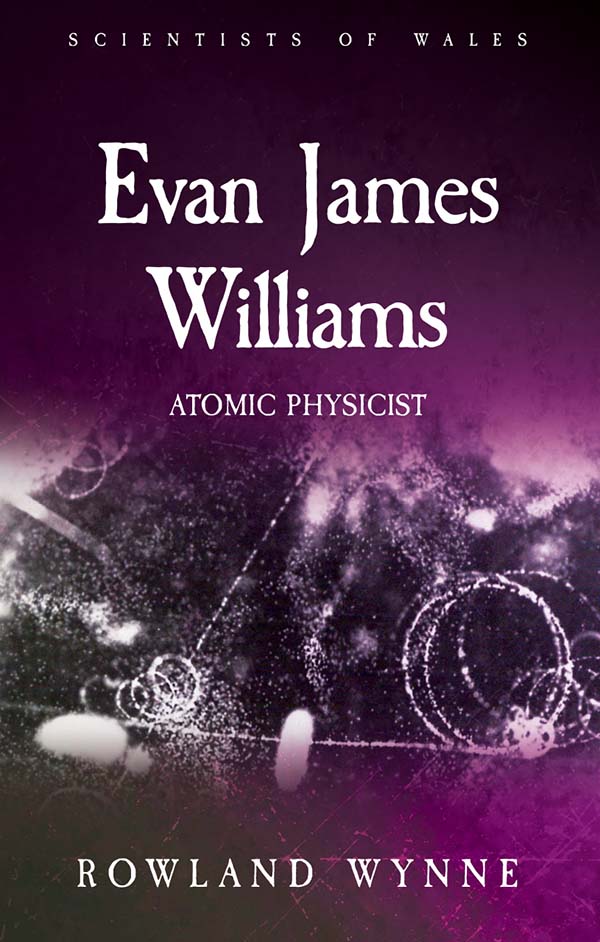