Horror and Religion is an edited collection of essays offering structured discussions of spiritual and theological conflicts in Horror fiction from the late-sixteenth to the twenty-first century. Contributors explore the various ways that horror and religion have interacted over themes of race and sexuality; the texts under discussion chart the way in which the religious imagination has been deployed over the course of Horror fiction’s development, from a Gothic mode based in theological polemics to a more distinct genre in the twenty-first century that explores the afterlife of religion. Horror and Religion focuses on the Horror genre and its characteristics of the body, sexuality, trauma and race, and the essays explore how Horror fiction has shifted emphasis from anti-Catholicism and anti-Semitism to incorporate less understood historical and theological issues, such as the ‘Death of God’ and the spiritual destabilisation of the secular. By confronting spiritual conflicts in Horror fiction, this volume offers new perspectives on what we traditionally perceive as horrifying.

Eleanor Beal and Jonathan Greenaway have assembled here a truly stimulating collection of essays devoted to exploring the often surprising connections between religion and horror, from the eighteenth century through to the present day. As eclectic in its various critical approaches as it is in the range of texts, authors and topics covered, the collection, refreshingly and perhaps self-consciously so, is a very broad church. Horror and Religion is a welcome addition to the recent critical interest in the theology of the Gothic mode, and is bound to become a key text in the field.’
-Dale Townshend, Professor of Gothic Literature, Manchester Centre for Gothic Studies

'A must-read text for those who are interested in the impact of Christian theology on literary and popular culture; the evolution of religious thought in the West; constructions of racial Otherness and monstrosity; configurations of, and responses to, deviant and transgressive bodies; the cultural effect of secularism and post-secularism; the Gothic’s historic and continued engagement with Christianity; and the holistic study of literary Horror texts. Horror and Religion is successful in its intent to interrogate the ways in which religion and theology has maintained a shadowy presence in Horror texts over the centuries.'
- Review by Chloe Campbell in Fantastika Journal, Volume 5, Issue 1, May 2021

Acknowledgements
Notes on Contributors
Introduction
1. ‘Headlong into an Immense Abyss’: Horror and Calvinism in Scotland and the United States - Neil Syme
2. The Blood is the Life: An Exploration of the Vampire’s Jewish Shadow - Mary Going
3. Decadent Horror Fiction and Fin-de-Siècle Neo-Thomism - Zoë Lehmann Imfeld
4. ‘Let the Queer One in’: The Performance of the Holy, Innocent and Monstrous Body in Vampire Fiction - Rachel Mann
5. More or Less Human, or Less is More Humane?: Monsters, Cyborgs and Technological (Ex)tensions of Edenic Bodies - Scott Midson
6. Horror and the Death of God - Simon Marsden
7. Aboriginal Ghosts, Sacred Cannibals and the Pagan Christ: Consuming the Past as Salvation in Wilson Harris’s Jonestown - Eleanor Beal
8. Reconfiguring Gothic Anti-Catholicism: Faith and Folk-Horror in the Work of Andrew Michael Hurley - Jonathan Greenaway
9. ‘Deliver Us from Evil’: David Mitchell, Repetition and Redemption - Andrew Tate
Bibliography
Index

Jonathan Greenaway is Associate Lecturer in Film and Literature at Manchester Metropoli¬tan University. He is co-founder and editor of the Dark Arts Journal, and is author of the monograph Theology, Horror, and Fiction: A Reading of the Gothic Nineteenth Century. 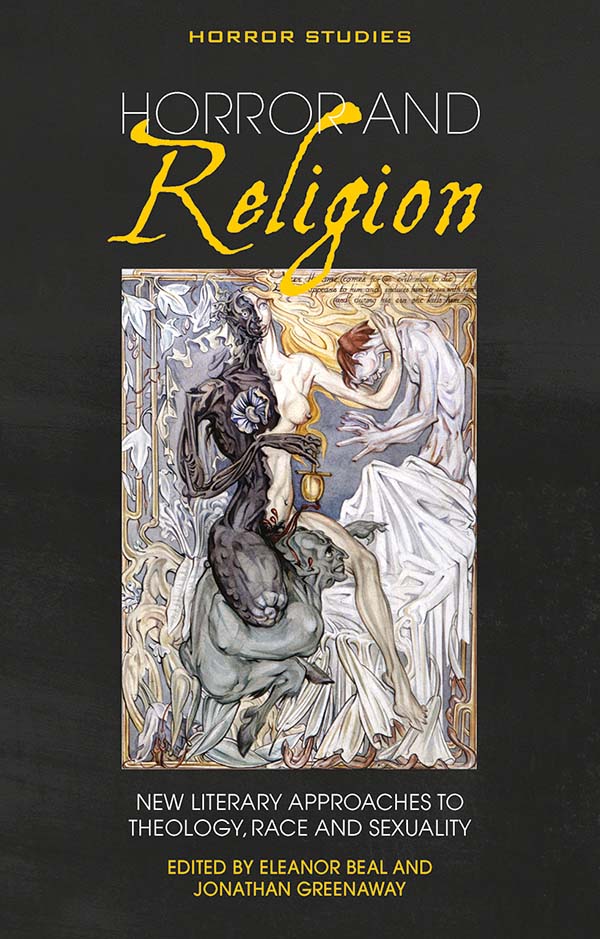