This book focuses on Kant’s analysis of three issues crucial for contemporary politics. Starting from a new reading of Kant’s account of our innate right to freedom, it highlights how a Kantian foundation of human rights, properly understood and modified where necessary, appears more promising than the foundational arguments currently offered by philosophers. It then compares Kant’s model for peace with the apparently similar model of democratic peace to show that the two are profoundly different in content and in quality. The book concludes in analysis of Kant’s controversial view of history to rescue it from the idea that his belief in progress is at best over-optimistic and at worst dogmatic.   Congratulations to Professor Luigi Caranti and his book 'Kant's Political Legacy' which has been given a 'honorable mention' by the North American Kant Society in the competition for the best 2018 book on Kant!! http://northamericankantsociety.onefireplace.org/Announcements/6660588

‘In his latest book, Luigi Caranti writes clearly and with insight not only about the legacy of Kant’s political philosophy, but also about our present political condition and the painful gap between the two. Arguing that Kant correctly interpreted can in fact offer better concrete guidance for political action in today’s world than many of his foes as well as friends realise, this is a work from which all thoughtful readers concerned with reducing injustice will benefit.’
–Professor Robert B. Louden, University of Southern Maine

‘Luigi Caranti demonstrates the importance of Kant’s political philosophy for today’s world. His defence of Kant’s rigorous commitment to the principle of the supreme value of personal freedom, combined with his need for sensitivity in the application of this fundamental principle, should be a lesson not just for Kant scholars and political philosophers, but for politicians and citizens throughout the world.’
- Professor Paul Guyer, Brown University

‘Kant’s political thought, as contained in a series of books and essays from the 1780s and 1790s, combines a primarily juridical perspective on the norms of civic life with a focus on the conditions of political progress toward equal freedom. Luigi Caranti’s book on Kant’s lasting legacy in political philosophy builds on recent international scholarship in the field, while seeking to extend the appeal of Kant’s thinking to contemporary political issues and concerns. Concentrating on three central interrelated topics (human rights, world peace and political progress), Caranti manages to move Kantian political thought from the level of abstract principles to the sphere of concrete political precepts. In the process, Kant emerges as a significant resource for current political theory and practice.’

'Its objective is not only to offer a coherent vision of Kant's political philosophy on the basis of a detailed analysis of the sources, but, in addition, to elucidate the theoretical tools which are to be found in his thought with which we can confront at the global level the great political challenges of our century.'
- Natalia Lerussi, Philosophy and Society Vol 29 No 4 (2018)

'This book represents a clear example of how a great philosophical legacy can contribute not only to the comprehension of the contemporary world, but also to the definition of new thought-paradigms and, why not, even intervention strategies at a more general level.'
- Philosophy and Society Vol 29 No 4 (2018)

'One ot the great virtues of Luigi Caranti’s book is to bring out at every stage the realism of Kant’s grasp of the human condition, whilst at the same time emphasizing the commitment to progress and cosmopolitan peace that lies at the heart of Kant’s political philosophy.'
- Howard Williams, Cardiff University, Kantian Review 24 Issue 2

'Luigi Caranti’s Kant’s Political Legacy is a rich and illuminating study of Kant’s continuing relevance in three areas: human rights, democratic peace, and the ethics of statesmanship. Caranti’s book is a welcome addition to the recent revival of interest in Kant’s political philosophy. It is also wide-ranging, and has the notable (and rare) advantage of being accessible to non-specialists while not losing in sharpness.'
- Andrea Sangiovanni, Kantian Review, Volume 24 Issue 2

'It is intended both as “an antidote” to realist posturing and as a qualified defense of Kant’s own views about human rights, peace and progress. Throughout the book Caranti develops an extended argument “largely inspired by Kant”, but one that does take a few departures from the Sage of Königsberg’s own position.'
- Professor Robert Louden, Kant Studien

'I find Kant’s Political Legacy to be a valuable demonstration of the on-going contribution that Kant can make to the discussion of important issues in national politics and international affairs. It is particularly salubrious in our time of increasing illiberalism world-wide.'
- Professor Paul Guyer, Brown University, Kantian Review, Volume 24 Issue 2

'Luigi Caranti’s Kant’s Political Legacy: Human Rights, Peace, Progress is a lucid and ambitious contribution to the growing critical discussion of Kant’s political thought. Wide-ranging in its scope, it aims to combine hermeneutic fidelity (and accompanying attention to the recent scholarly literature) with practical applications likely to be of interest to a wider audience.'
- open-access in Contemporary Political Theory: https://link.springer.com/article/10.1057/s41296-020-00422-4.

'In all three areas of Kant’s political philosophy that Luigi Caranti covers, he offers compelling and persuasive accounts that sharpen our understanding of Kant and show the value of close study of historical texts for today’s philosophy.'
- Frederick Rauscher, Journal of the History of Philosophy, Volume 57, Number 2, April 2019 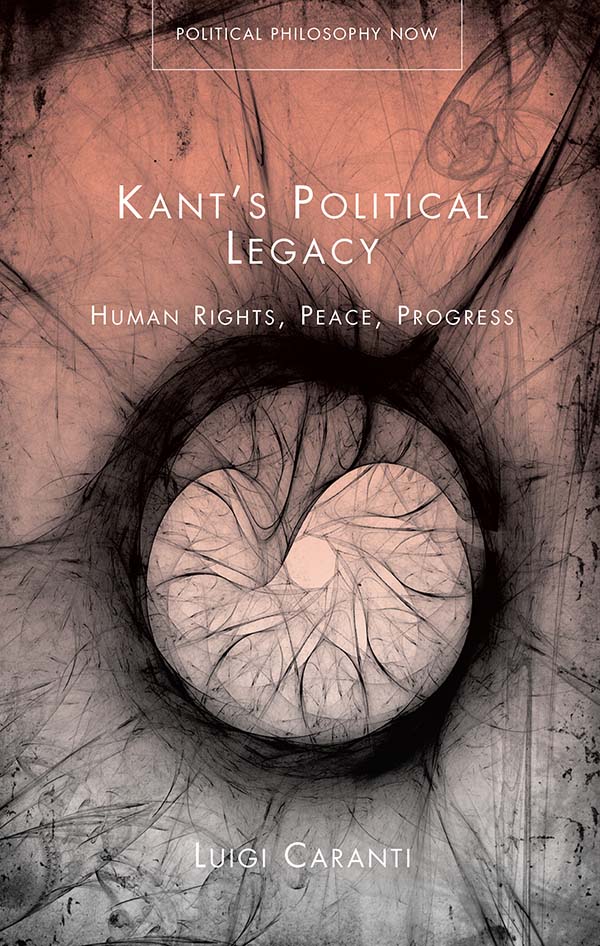