This is a ground-breaking exploration that runs generally against the critical grain in identifying a burgeoning production of films of fear and horror before the admission of the horror film genre per se. It is a study that reveals and emphasises the formative and innovative power of film, from Georges Méliès’s Le Manoir du Diable (1896) to Edgar G. Ulmer’s superbly reflexive The Black Cat (1934). With its focus on twenty-one key films, and referencing other relevant productions, the present study involves an inclusive and sensitive approach. It reveals an awareness of the heterogeneity of horror production with the discussion spanning the period of the invention of movies, the expansion from single-reelers to longer and continuous productions, and the advent of talkies. Stepping beyond the bounds of Anglo-American studios, in its seven chapters the book involves the work of directors from France, Spain, England, Moravia, Germany, Italy, Denmark, Mexico and the USA, to consider and compare films that have not previously received serious attention.

‘This is an excellent book that provides horror scholars of the future with a foundation upon which to build. Re-envisaging the First Age of Cinematic Horror will be of great use to anyone researching the genre’s earliest filmic incarnations, and is a godsend to those of us teaching classes on the beginnings of cinema.’
-Dr Johnny Walker, Northumbria University

'Re-Envisaging the First Age of Cinematic Horror is a meticulously researched book, with an attention to detail that affords the reader a truly immersive historical experience. It is an important addition to scholarship on early film in general, as well as to Horror Studies in particular.'
- Sophia Staite, Aeternum: The Journal of Contemporary Gothic Studies, Volume 6, Issue - https://docs.wixstatic.com/ugd/c8fb40_bc74b205ea3246909bf0c20528aee3ef.pdf

Contents:
List of Illustrations
Acknowledgements
Introduction
1. Satanic seizure and the Crimson Smoke of Fear
2. Torture Rooms and the Diva of Death
3. Omnibus to Hell and the Inescapable Carriage
4. Tickets to the Madhouse
5. Experimental Delirium
6. Mind the Gap! Fear on the verge and after Sound
7. Sadean Masterpieces, Dread and Slaughter
List of Illustrations
Acknowledgements

David Annwn Jones lectures for the Open University in Leeds and Manchester; he is a critic, poet, playwright and acknowledged authority on the phantasmagoria magic lantern-show. 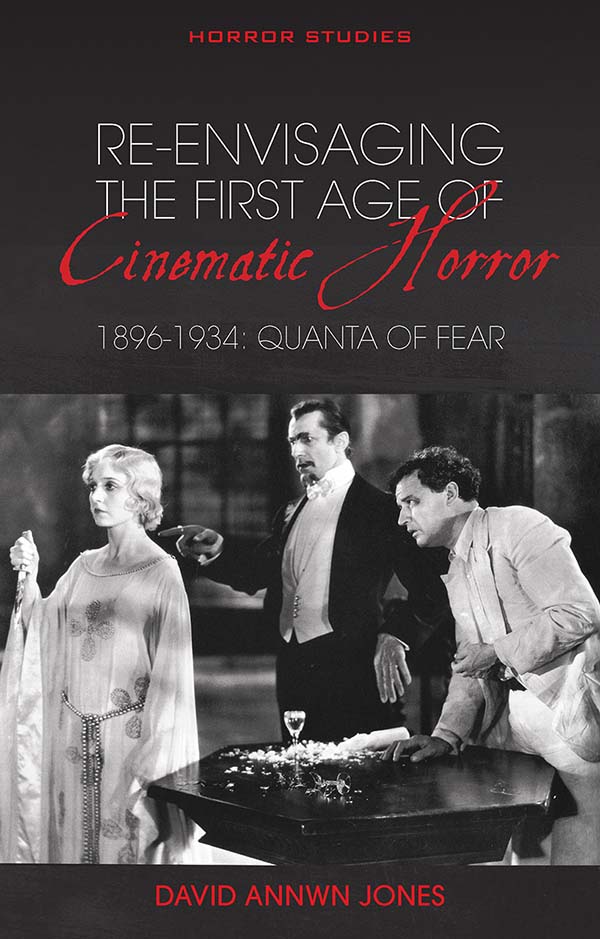