India is mutating – and its Science Fiction with it. Star Warriors of the Modern Raj is a critical catalogue of contemporary India’s anglophone SF, a path-breaking work that flits between texts, vantage points and frameworks. An alternative to a Eurocentric perspective of SF, this study avoids essentialising definitions and delves into how the world of SF (text) intersects with that of the writer/reader. Fusing paradigms of Science Fiction Studies, South Asian Studies and Postcolonial Studies, among others, the book explicates how India and its SF negotiate one another. It evolves a ‘transMIT thesis’ to analyse how mythology (M), ideology (I) and technology (T) contour Indian SF and its fictional reimaginings. This study identifies the manifestations of divine beings within SF as differing epistemological categories, locates the modes of marginalisation within Indian popular imagination as altars of alterity, before proceeding to analyse how newer technologies engage with socio-political anxieties in and through SF.   Interested in learning about Science Fiction and South Asia? Click on the link below to read Mithila Review interview with Sami Ahmad Khan where he discusses his upcoming volume Star Warriors of the Modern Raj. https://mithilareview.com/ahmad_03_21/

‘In Star Warriors of the Modern Raj, India, one of the most complex and diverse political cultures in the world system meets one of the most capacious and mutable artistic genres, science fiction. Sami Ahmad Khan’s book – the first major work devoted to contemporary Indian Science Fiction in English – makes two important contributions to the study of global SF. The first is an original and sophisticated theory tailored for SF in a country where science and myth interflow, and where caste, religion, language, and geopolitics affect every aspect of social life. The second is an exciting introduction to recent works by Anglophone Indian writers. Star Warriors of the Modern Raj is an invaluable addition to the growing scholarship on Indian science fiction that will be immensely useful for future work on emerging SF cultures.’
-Professor Istvan Csicsery-Ronay Jr., DePauw University, co-editor of Science Fiction Studies

‘It’s hard to say whether Star Warriors of the Modern Raj does a better job of mapping western science fiction histories and theories onto Indian SF, or a better job of mapping histories and theories of Indian science fiction onto western SF – but the reciprocal relationships between these two traditions become fascinating in Khan’s hands. Khan brings a new generational as well as a new geographical vision to our understanding of the global and “possibly sentient” construct of the genre. What is easier still to say is that this valuable study, particularly in its focus on twenty-first century Indian SF in English, is always advanced by lively prose and a thought-provoking conceptualisation scheme that is often no less than breath-taking. In masterly readings, Khan’s encyclopedic approach systematically negotiates fraught and provocative conflicts in SF theory as it explores in both Indian and western SF issues – including bright and broken futures, post-colonial hangovers, Islamic and cyber terrorism, competing constructions of gender and cultural identity, representations of class and caste, impacts of environmental degradation, conflicts between science and religion, and the intersecting paradigms of mythology, ideology, and technology – intersections always at the heart of SF.’
-Professor Brooks Landon, University of Iowa

‘This is a lively introduction to a rich body of work: Indian Science Fiction in English. By aiming his book for readers new to SF, especially Indian SF, he opens up an exciting world accessible to a large audience. This will also be a valuable source for scholars and fans of SF, offering insight into the ways ISFE reveals and explores India in the present cultural and political climate.’
-Professor Emerita Joan Gordon, Nassau Community College, editor of Science Fiction Studies

‘In Star Warriors of the Modern Raj, Sami Ahmad Khan boldly creates the first comprehensive framework for twenty-first-century Anglophone Indian speculative fiction studies. Khan’s insights on contemporary Indian SF merge the best features of a SF writer engaging with their own wider community and the analytical incisiveness of a literary critic. The ‘IN situ Model’ accomplishes the marvellous feat of bridging international/global SF studies, Anglophone SF criticism, and state of the art Indian SF research, and goes beyond them in offering something that can speak not only to global SF scholarship but also to everyone interested in learning more about how Indians and people around the world imagine the future. From climate catastrophes to future wars, from alien invasions to surveillance states, Khan identifies all the trends, patterns and deep-rooted socio-political causes behind the tremendous growth of Indian SF in the last decades. An urgent book for urgent times, and one that can only be called an astounding theoretical development, this will undoubtedly set the tone for Indian and global SF studies for the foreseeable future.’
-Associate Professor Bodhisattva Chattopadhyay, University of Oslo, Norway

‘This is a scrupulously researched, theoretically sophisticated, and engagingly written work. Khan covers a wide range of authors and texts written since the beginning of the twenty-first century, and his insightful analysis of Indian English science fiction is sure to become a prized resource for scholars and writers alike. This book offers not only a multi-dimensional examination of the evolving trends and cultural implications of contemporary Indian English science fiction, but also exudes an awareness of their historical roots and their place within the complex matrix of multilingual Indian and global speculative fiction traditions. This is an important addition to the study of both global science fiction and postcolonial literature.’
-Associate Professor Suparno Banerjee, Texas State University

‘With the enthusiasm of a fan and the analytical tools of a scholar, Khan surveys the surprisingly rich and expanding cosmos of post-2000 Indian Science Fiction in English. His critical interventions on themes of alterity, class and caste, gender dynamics, and the mythic intriguingly probe the question, “Is there an Indian way of writing sci-fi?”’
-Professor Philip Lutgendorf, University of Iowa

‘Anyone interested in SF should read this book. Everyone interested in Anglophone Indian SF must read this book. This path-breaking study explores contemporary Indian Science Fiction in English with finesse, incisiveness and great wit. Khan’s scholarship, theoretical sophistication, and critical acumen make this a book that every SF scholar has to engage with.’
-Professor G. J. V. Prasad, Jawaharlal Nehru University

‘Star Warriors of the Modern Raj proposes a new model for Indian Science Fiction in English which will be very useful for students and advanced scholars of the genre – transMIT, tying in the three pillars of ISFE – mythology, ideology and technology. Written in an easy and accessible language, Khan’s book provides a solid underpinning of the troubled history of definitions of the genre, and for once, this review includes Indian thinkers and writers. The accessibility of the book does not take away from the very thorough research it is based on and the original insights it offers into SF and its fellow travellers. One of the most valuable contributions of this volume in my opinion is the original and independent perspective it offers on Indian SF, steering away from the binary rocks of seeing it either as a “Western” import or imitation and of locating it in ancient Indian mythological texts. It provides a solid historical review of the genre, once again not restricting itself to the Western definitions but including Indian ones, and provides a fascinating model of “how Indian SF (and therefore, ISFE, in specific) exists across the intersecting domains of technology, ideology and mythology within the emergent genre space of a developing country”. This is an invaluable addition to the growing and exciting area of SF studies in and from India and will certainly transmit the author’s own passion and excitement in the subject to the readers.’
- Professor Angelie Multani, IIT Delhi, India

‘This engaging volume provides much-needed models to explain various aspects of what has come to be called Indian science fiction. Choosing to explain a few things very well rather than many things poorly, Khan provides an interesting account of what writers who work in Indian science-fiction are up to. His arguments will raise, no doubt, as many new quarrels as it will settle old ones. There is much here for current as well as future scholars in this accessible and provocative book.’
-Anil Menon, writer and editor 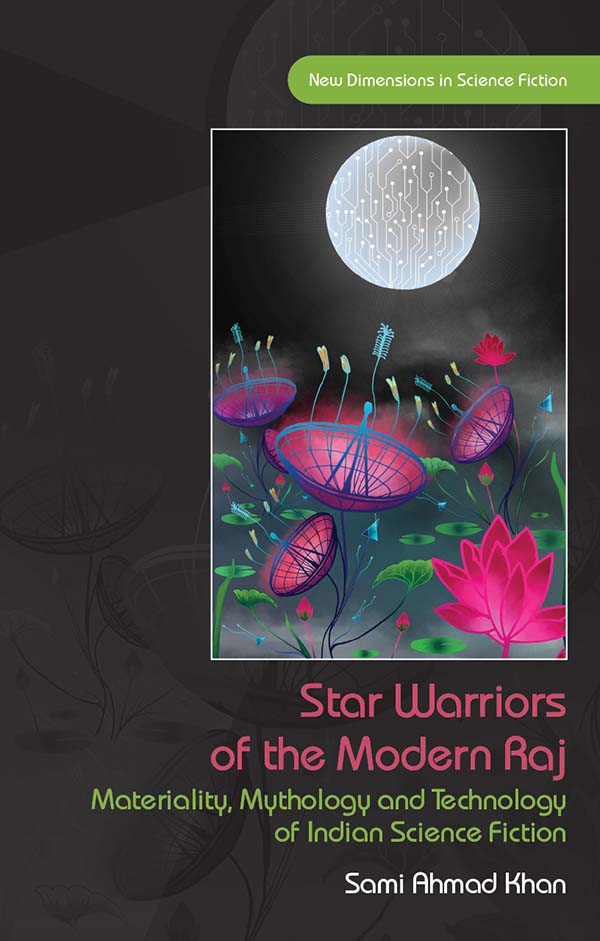