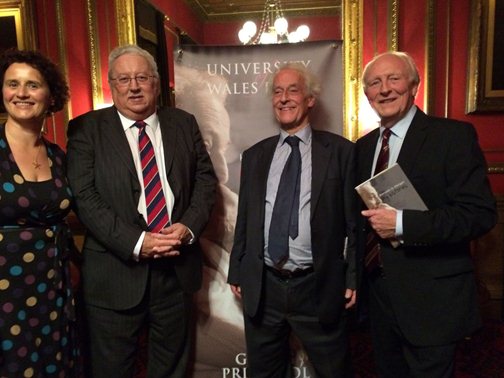 n his revealing memoir, published in the year of his eightieth birthday, Kenneth O. Morgan reflects on marriage and bereavement, on re-marriage, parenthood, friendship, religion and morality, his reactions to the historical changes he has witnessed, from attending a village school in rural Wales and wartime air-raids, through school in Hampstead and study in Oxford University and in Wales, down to entry into the House of Lords. Despite past traumas, this memoir still conveys invigoratingly a senior scholar’s idealism, abiding sense of optimism and belief in progress.

On Thursday 22nd October, Helgard Krause and Catrin Harries travelled to the Reform Club in London to attend the much anticipated launch of these memoirs, and enjoyed a very successful and entertaining evening.

Lord Neil Kinnock provided the evening’s entertainment, regaling us with witty anecdotes of how the two became friends, involving police, alcohol, and much swearing (see Chapter Three of the book), describing his long-time friend as “the most penetrating labour historian of all time”.

To close, Ken said a moving thank you to friends and family for their love and support throughout his long career and especially at times of grief in his life. He also thanked University of Wales Press for publishing his autobiography, half a century after the publication of his first UWP book. As he writes in the Foreword: “after fifty-two years with our national press, I know I am with the almost perfect publishers”. We can only hope that our relationship continues to flourish.