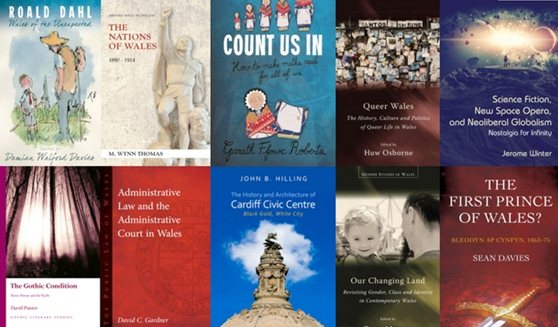 To celebrate Academic Book Week we’ve taken 20% off all our 2016 titles – just use the code ABW17 on our website until the end of January.

Last year featured another diverse list, including books on a range of academic and popular subjects. Here’s a small selection, with many more available across the site:

The Nations of Wales: 1890-1914
by M. Wynn Thomas
Certain simple and stereotypical images of Wales strike an immediate chord with the public, both in Wales itself and beyond its borders. For much of the twentieth century, the country was thought of as ‘The Valleys’, a land of miners and choirs and rugby clubs. This image of a ‘Proletarian Wales’ (with its attendant Socialist politics) dominated popular imagination, just as the image of ‘Nonconformist Wales’ – a Wales of chapels and of a grimly puritan society – had gripped the imagination of the High Victorian era. But what of the Wales of the late Victorian and Edwardian decades? What image of Wales prevailed at that time of revolutionary social, economic, cultural, religious and political change? This book argues that several competing images of Welshness were put in circulation during that time, and proceeds to examine several of the most influential of these as they took the form of literary texts.

Count Us In
by Gareth Roberts
Mathematics, like language, is a universal experience. Every society counts and is empowered by its ability to count and to measure. The mathematical processes developed within various cultures differ widely, and Count Us In explores these cultural links, drawing examples from the author’s personal experiences. As a popular book on mathematics and on the personalities who created that mathematics, there are no prerequisites beyond the reader’s rudimentary and possibly hazy recollection of primary-school mathematics and a curiosity to know more.

Queer Wales: The History, Culture and Politics of Queer Life in Wales
edited by Huw Osborne
The relationship between nation and queer sexuality has long been a fraught one, for the sustaining myths of the former are often at odds with the needs of the latter. This collection of essays introduces readers to important historical and cultural figures and moments in queer life, and it addresses some of the urgent questions of queer belonging that face Wales today.

Our Changing Land: Revisiting Gender, Class and Identity in Contemporary Wales
edited by Dawn Mannay
The last two decades have seen big changes within a small nation; the distinctiveness of Wales, in terms of its political life and culture, has grown considerably in that time. This edited collection by a range of eminent Welsh writers, emerging academics and creative artists examines what is distinctive about Wales and Welshness in an interdisciplinary yet comprehensive manner. The chapters explore the role of men and women in Wales and of Wales itself as a nation, an economy, and a centre of partially devolved governance, raising questions related to equality, policy and progression.

The Gothic Condition: Terror, History and the Psyche
by David Punter
This book brings together fourteen of the most ambitious and thought-provoking recent essays by David Punter, who has been writing on the Gothic to academic and general acclaim for over thirty years. Punter addresses developments in Gothic writing and Gothic criticism since the mid-eighteenth century, by isolating and discussing specific themes and scenarios that have remained relevant to literary and philosophical discussion over the decades and centuries, and also by paying close attention to the motifs, figures and recurrences that loom so large in twenty-first-century engagements with the Gothic.

The History and Architecture of Cardiff Civic Centre: Black Gold, White City
by John B. Hilling
Cardiff’s civic centre in Cathays Park, described as the finest civic centre in the British Isles, is an impressive planned group of public buildings, begun largely with wealth created by the coal industry in the south Wales coalfield. This book covers the Cardiff site’s earlier evolution as a private park in the nineteenth century by the fabulously rich Bute family, and the borough’s battles to obtain land for public buildings and the park’s development in the twentieth century, to become Britain’s finest civic centre. All the buildings, memorials and statues in the park are fully described and illustrated in this book which includes maps, plans and photographs.

Science Fiction, New Space Opera, and Neoliberal Globalism: Nostalgia for Infinity
by Jerome Winter
From our new series, New Dimensions in Science Fiction
One of the few points critics and readers can agree upon when discussing the fiction popularly known as New Space Opera – a recent subgenre movement of science fiction – is its canny engagement with contemporary cultural politics in the age of globalisation. This book avers that the complex political allegories of New Space Opera respond to the recent cultural phenomenon known as neoliberalism, which entails the championing of the deregulation and privatisation of social services and programmes in the service of global free-market expansion. Providing close readings of the evolving New Space Opera canon and cultural histories and theoretical contexts of neoliberalism as a regnant ideology of our times, this book conceptualises a means to appreciate this thriving movement of popular literature.

The First Prince of Wales? Bleddyn ap Cynfyn, 1063-75
by Sean Davies
This is the first book on one of Wales’s greatest leaders, arguably ‘first prince of Wales’, Bleddyn ap Cynfyn. Bleddyn was at the heart of the tumultuous events that forged Britain in the cauldron of Norman aggression, and his reign offers an important new perspective on the events of 1066 and beyond. He was a leader who used alliances on the wider British scale as he strove to recreate the fledgling kingdom of Wales that had been built and ruled by his brother, though outside pressures and internal intrigues meant his successors would compete ultimately for a principality.