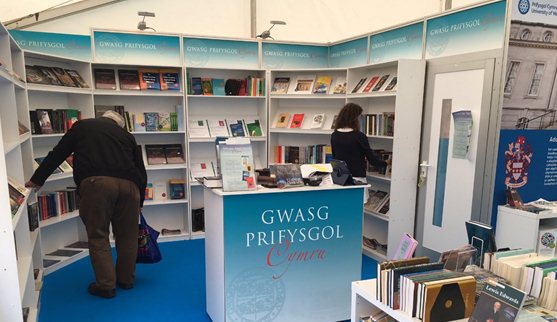 The University of Wales Press attended the 2016 Eisteddfod in Abergavenny last week. I went along to work in the Press tent, and to experience my first Eisteddfod. As a Welsh learner I was eager to immerse myself in the festival, but also concerned that my limited knowledge of the language would be a problem.

I needn’t have worried, as the Eisteddfod was very open and friendly to English speakers. There was a huge variety of stalls, attractions, and shows, and I found it all very accessible to a beginner like myself. Working in the Press tent gave me an opportunity to improve my Welsh, and the customers were happy to help, with some even taking me through a few commonly used phrases. Coming from a largely English-speaking part of Wales, I’ve never lived in a community where Welsh was the dominant language. It was interesting to see it used so widely, and gave me incentive to improve my skills.

There are some things that you only see at the Eisteddfod. While I was there I got the feeling of something old being brought into the modern world. Amongst the stalls for businesses and universities there was the Gorsedd of Bards, all dressed in long robes, performing ceremonies in a stone circle. It was strange to see a gathering of druids being filmed by an audience with mobile phones – like going back in time to experience a traditional part of Wales’ culture that isn’t usually seen. The efforts to bring in a wider audience to the Eisteddfod can only be a good thing, as the majority of the country who don’t speak Welsh could come to embrace it.