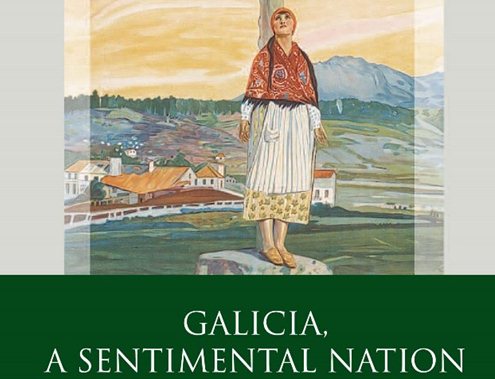 2013/2014 has been a gem of an academic year for me, and most of it has been thanks to the publication of my first monograph, Galicia, a Sentimental Nation: Gender, Culture and Politics, by the University of Wales Press. The book and its primary argument –that the widespread stereotype of Galician Celtic sentimentality can be studied as a kind of orientalist fantasy arising from unequal Spanish/Galician relations– had been in the making for about four years. But it was only after I was awarded an AHRC Research Fellowship for 2012/13 that I could finish my manuscript on time to send to UWP, who had supported my project and offered me a book contract in late 2011.

Since its publication in June 2013, the book’s reception has brought me nothing but joy and a sense of (so far pleasurable) trepidation. While in international Hispanism the book has been welcomed as an innovative application of postcolonial theories to one of Spain’s internal national conflicts, the book has been received in Galicia as a bit of shock to the country’s cultural system. This is probably because part of my aim in the book was not to present the ongoing Galician-Spanish conflict as a story of binary opposites, but as a historically complex process, where different positions across the spectrum of Galeguismo have been able to derive advantages in the path towards the institutionalisation of Galician culture, usually at the expense of Galician identity, which has been conventionally defined as sentimental, feminised and politically passive.

I think the months after the publication of the book could be accurately described as ‘heady’ – at least for academic standards. Shortly after the book was published, I was asked to be interviewed on the Galician public radio (on two different programmes) and by a Galician blog on political thought; an online TV channel featured an extended interview about the book’s contents; and reviews and further interviews have appeared in Galician online blogs and printed cultural magazines. In November 2013 the main Galician daily, La Voz de Galicia, published the news of my book launch at the University of Vigo, an item that remained among the top ten most read articles for a week. Book launches held in Galicia have been essential for keeping up the debate, especially if you consider that the book’s price and language do not make it easily available for the contemporary Galician reader. Since September 2013 I have presented the book at six different settings including the Universities of Vigo and Santiago de Compostela and cultural centres in Vigo, Ferrol, A Coruña and Pontevedra. I have been invited by the Faculty of Social Sciences of the University of A Coruña to present the book there in September 2014, a prospect I am very excited about, as it gives me the opportunity me to think about the sociological implications of my work too.

One of the most thrilling outcomes of the book’s reception in Galicia is the fact that a translation into Galician-Portuguese is already under way. My publishers will be the independent Através Editora, a Galicia-based publishing house specialising in scholarly and literary publications in the Portuguese written standard (usually referred to in Galicia as the international written standard for Galician). I have spent the last months working closely with the translator, Fernando Corredoira, whose sterling job rendering my helplessly profuse academic English into a Galician that is fresh and effective keeps me in utter awe. I cannot wait for the translation to be out, not least because we will be presenting it at this year’s Culturgal Festival, the most important culture and book fair in Galicia, happening just before Christmas.

All in all this has been a truly exciting year for me and I have much to thank my first publisher, the University of Wales Press, for their belief in the book, their availability at all stages in the process and their professionalism. I have received much positive feedback from colleagues about the book’s fine format and presentation, and I have always responded that this is to the credit of UWP’s meticulous and diligent work. I could not have asked for a better publisher for my first monograph and this blogpost is only a small token of thanks for their fabulous help at a crucial stage of my academic life.
Dr Helena Miguélez-Carballeira