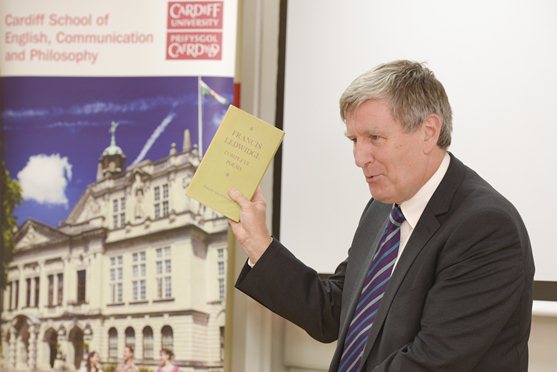 IMAGE: Dr Daniel Mulhall, Irish Ambassador to Great Britain, giving the conference’s opening lecture on the war poetry of Francis Ledwidge and Thomas Kettle.
A complex picture of Welsh and Irish experiences of and responses to the First World War emerged at the Ireland, Wales, and the First World War conference, held at Cardiff University on 10th to 12th September. Hosted by the Wales-Ireland Research Network, this interdisciplinary event provided opportunities to explore the conflict from distinctively Welsh and Irish perspectives, in contrast to the centralised, British view which has formed the focus of many recent commemorations.

Papers considered reactions of writers and artists to the war, alongside sources including army records, newspapers and periodicals. Common to many discussions was the revelation that conceptions of national and gender identity were often negotiated in Welsh and Irish renderings of the conflict, in representations of soldier heroes, for example. Marginalised perspectives were brought to light, including those of the women who stayed at home, and specifically Irish and Welsh contexts such as nationalist movements, conscientious objection and religious diversity informed discussions.

Highlights of the conference included a lecture on the war poetry of Francis Ledwidge and Thomas Kettle from Irish Ambassador to Great Britain, Dr Daniel Mulhall. Presentations also asked how best the war and lives lost might be memorialised and how commemorations can shape memories in the present and create an educational legacy for the future.

Wales and Ireland 1914 – 1918: Images of Two Wars, an exhibition to accompany the conference can be viewed at the Cardiff University Special Collections and Archives on weekdays in September and October: http://scolarcardiff.wordpress.com/2014/09/05/wales-and-ireland/