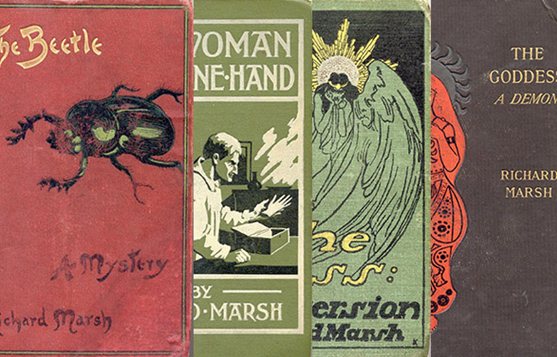 What was the bestselling gothic novel of 1897? Many would guess Bram Stoker’s Dracula, but Richard Marsh’s The Beetle: A Mystery in fact beat Stoker’s novel in popularity for many years. In 1913, when the fifteenth impression of The Beetle appeared, Dracula had only reached its tenth, and Marsh’s novel was even filmed first, Alexander Butler’s 1919 adaptation preceding F. W. Murnau’s Nosferatu by three years. According to an unsubstantiated family legend, The Beetle and Dracula were the result of a wager between Marsh and Stoker, who knew each other from London’s literary and theatrical circles. If Dracula has fared better in the long run, at the fin de siècle Marsh’s text was a clear winner, though the legend does not reveal what prize, if any, Marsh received for his efforts. The two novels in fact share a number of themes and have therefore often been examined together: in both, a malevolent foreign monster invades a wonderfully atmospheric, nocturnal London, wreaking havoc amongst its socially divided population of New Women, men of science, aristocrats, criminals and the poor. Marsh’s monster turns out to be an Egyptian or Sudanese Priestess of Isis who shapeshifts between the identities of a beautiful young woman, a horrendously ugly old man and a gigantic scarab.

This year marks the centenary of Marsh’s death. Born Richard Bernard Heldmann, Marsh (1857–1915) was a prolific professional author who wrote scores of novels and hundreds of short stories in a number of popular genres, including the Gothic, crime thriller, detective story, humour and popular romance; as Bernard Heldmann, he also produced school and adventure stories for a juvenile audience. Heldmann had become ‘Richard Marsh’ because of an unfortunate conclusion to a youthful misdemeanour: in his mid-twenties, Heldmann had briefly assumed a number of false, gentlemanly identities, living off bad cheques before the law caught up with him and he was sentenced to eighteen months’ hard labour. After this escapade, he adopted the penname ‘Richard Marsh’ and proceeded to live another kind of double life as a pseudonymous author. He was wonderfully prolific, publishing on average three volumes a year and in 1900 managing as many as eight.

The University of Wales Press marks Marsh’s centenary by publishing the first ever book-length study of the author. Part of the Gothic Authors: Critical Revisions series, Richard Marsh situates Marsh within the Gothic canon of his period and explores the author’s rich Gothic oeuvre through the lens of spatial theory. Marsh’s work has most commonly been analysed from a gender studies or postcolonial perspective, but I want to suggest that he was also a writer with an acute sense of spatiality, which is consistently articulated in his fiction. Drawing on a wide range of previously unexplored Marsh texts, Richard Marsh examines Marsh’s Gothic cityscapes and houses, his fascination with Modernist flux and transport, and the haunted spaces of his supernatural short stories. Marsh’s writings are now widely available in modern editions, and his centenary year is the perfect time to rediscover this seminal fin-de-siècle master of the macabre, whose ‘lurid imagination’, as one contemporary reviewer put it, will ‘make the flesh of even the least susceptible reader creep’.
Minna Vuohelainen