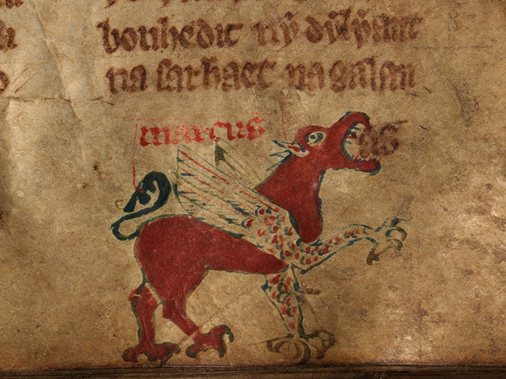 The lively crowd of students and academics of all ages that came together for the Seventh Bangor Colloquium on Medieval Wales last weekend attested visibly to the interest in this field in Wales at present. I was only able to attend the conference for a day, but it turned out to be a day full of interesting papers and lectures.

Alex Woolf from St Andrews University kicked off proceedings on Saturday with an illuminating lecture on Legend and History in Early Gwynedd. After an opportunity for a coffee and a chat in the majestic surroundings of Powis Hall, with Ed Povey’s striking murals in front of us, the first session of research papers was held. Sue Johns presented her reflections on some of the latest discoveries from the substantial research project on seals in medieval Wales in which she is a participant, concentrating particularly on what personal seals reveal about identity, gender and lordship in this period.

Another substantial and current research project gave David Parsons the topic for his paper, namely the Centre for Advanced Welsh and Celtic Studies project on Welsh saints. He described the website which has been developed as part of this project in order to gather information and resources about various saints together in one comprehensive and convenient space. A giantess rather than a saint was the subject of the other paper in this session, a colourful analysis by Emma Cavell (University of Leeds) of the relationship between Matilda de St Valery and the Welsh in the late eleventh and early twelfth centuries. She showed how this bold and unusual noblewoman was depicted as a giantess and as a witch in the generations that followed her death, partly because her readiness to take the reins in battling against the Welsh in the Marcher lordships on behalf of her husband, William de Braose, was so different to what became acceptable within women’s expected social role – not so much in the Middle Ages themselves, but during the centuries that followed.

Sara Elin Roberts chose an interesting aspect of Welsh legal history in the Middle Ages as the subject of her paper after lunch. She discussed what legal plaints from Wales reveal not only about cross-border contact between the Welsh and English, but also about the development of the Welsh legal system before the Edwardian Conquest. Rhian Andrews from Queen’s University, Belfast gave an exceptional lecture on Llywarch Brydydd y Moch’s poem to Rhys Gryg from Deheubarth, offering a close and penetrating analysis of how his role as an ambassador on behalf of his patron, Llywelyn ab Iorwerth, is revealed in the poem. Another session of very stimulating papers by Rhun Emlyn, Georgia Henley and Owain Wyn Jones brought the day to a close, with the subjects considered ranging from learning and education in the bishopric of St Davids in the late Middle Ages to the important Welsh chronicles that are held in Exeter Cathedral library. The future of our past in Wales is clearly in safe hands!