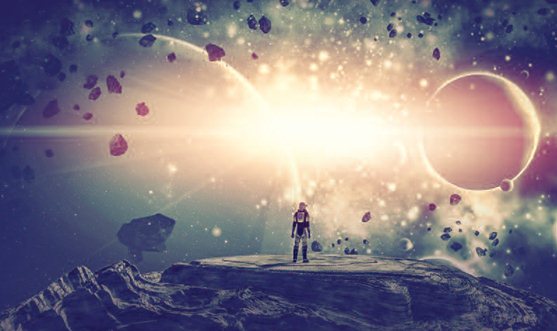 I am proud to announce the publication of Science Fiction, New Space Opera, and Neoliberal Globalism: Nostalgia for Infinity, published by the University of Wales Press for their New Dimensions in Science Fiction series. With this book, I attempted a critical intervention into science fiction studies by contextualizing the subgenre movement of New Space Opera against the recent global historical developments of neoliberal dynamics and processes. With the close editorial guidance and generous support of the University of Wales Press over the past few years, I have dramatically revised my initial doctoral research on the subject at the University of California, Riverside, expanding as well on my related scholarly work on globalization and science fiction. By way of promoting the publication of this book, University of Wales Press asked me to write this blog post in which I briefly outline the argument of the book and give a quick overview of its contribution to this exciting and important field of research.

New Space Opera has become the popular term for any and all new science fiction that brings innovative changes to space adventures traditionally featuring faster-than-light starships, galactic empires, doomsday devices, exotic alien encounters, and so on. For space opera has long been the bugbear of the science fiction genre; and the longstanding criticisms of the original commercial space operas — first published in pulp-magazine venues beginning with E.E. “Doc” Smith’s The Skylark of Space (1928) in Hugo Gernsback’s Amazing Stories — seem far from unwarranted today given not only their forgettable and formulaic plots, or their hastily written prose, thin characterization, and clumsy world-building, but also their infantile escapism, their disturbing fetishization of technology, and their assorted colonialist, sexist, and classist ideological baggage.

In the postwar period, space opera became so disreputable that gifted writers began to tap into its outré nostalgic appeal and revisit the subgenre to transform its tarnished material for their own individual aesthetic and commercial purposes; writers such as Jack Vance, Alfred Bester, Cordwainer Smith, and Samuel R. Delany began to produce their own takes on the space opera genre from the 1940s to the 1960s. Unconventionally, David Hartwell and Kathryn Cramer argue in their seminal anthology The Space Opera Renaissance (2006) that these writers are part of the New Space Opera. In the more orthodox view, however, New Space Opera does not arise until the late 1980s and into 1990s and 2000s when a catalogue of likeminded writers including Iain M. Banks, Ken MacLeod, Paul J. McAuley, M. John Harrison, Alastair Reynolds, Gwyneth Jones, Lois McMaster Bujold, Nancy Kress, and C.J. Cherryh, among many others seem to be working in uncoordinated concert with the same genre materials.

As a rediscovered subgenre boundary, New Space Opera quickly became marked for the uncanny familiarity of its frenetically paced adventure and awe-inspiring cosmic scales as much as the novelty of its deep characterization, ironic narrators, complex political stances of global scope, plausible electronic and digital technologies, and hard scientific verisimilitude.  Until now, no book-length project has attempted to grasp the literary and cultural function of this popular new subgenre. My book attempts to bridge this conspicuous scholarly and critical gap.

So what exactly is the enduring appeal of this now hoary subgenre? In The Billion Year Spree (1973), Brian Aldiss first coined the phrase “wide-screen baroque” in a discussion of the influence of E.E. ‘Doc’ Smith and A.E. van Vogt on science fiction as a genre.  Aldiss’s phrase has become deeply entwined with contemporary conceptions of space opera as an evolving subgenre: namely, the oft-quoted phrase represents Aldiss’s own unique New-Wave intervention into debates over space opera as a dynamic set of literary and filmic conventions and conversations; perhaps to a degree, Aldiss is even attempting to rescue space opera from Wilson ‘Bob’ Tucker’s lasting disparagement of the subgenre circa 1941 as “grinding, stinking, outworn space-ship yarn”.

The phrase ‘wide-screen baroque’ suggests the ornate stylistics of classical music and architecture bolted onto a sturdy cinematic chassis of stripped-down pulp thrills and pacing. Space opera, in Aldiss’s vision, becomes not simply a crassly commercial repository of pulp cliché, folk futurism, and techno-worship, but what Stephen Baxter, another popular New Space Opera writer, once called “vacuum diagrams”, or the projection of daring works of science fiction onto the cosmos. The grandeur of the wide-screen baroque tradition, that is, of New Space Opera, seems to evocatively capture inconceivably immense expanses of time and space juxtaposed cheek and jowl with monumental feats of human ingenuity and exuberant future-driven hopes.

I contend that the historical and cultural frame that can best explicate the diverse collection of works loosely labelled New Space Opera is neoliberalism. The expansion of transnational corporations over the globe during the second half of the twentieth century corresponds to the gradual emergence of New Space Opera as a viable commercial subgenre. Capitalist expansion was vouchsafed by neoliberal economic policies and the advocacy of free and open markets, deregulation, and privatization around the globe. Such neoliberal advocacy of market-based and capital-driven individualism, efficiency, and progress resulted in such draconian governmental measures as enforced domestic budget cuts, tax increases, raising of interest rates, reduced exchange rates, privatization of state programs, and openness to foreign direct investment.  The so-called Third World was especially impacted by neoliberal policies as economically struggling countries were expected to service loans that proved punitive and crippling for many postcolonial nations. Famously, Joseph Stiglitz, the chief economist and senior vice president for the World Bank from 1997 to 2000, described the neoliberal regime of “the Washington Consensus” as tantamount to a neo-imperialist status quo of “new missionary institutions’”, undergirded by the capitalist logic of “market supremacy.” Nostalgia for Infinity, the name of a recurring starship in Alastair Reynolds’ Revelation Space (2001-2017)series, reflects this retro-longing for infinite capital accumulation that threatens to imprison the globe in the status quo of yesteryear.

I argue that this neoliberal fantasy provides a necessary rubric for understanding the direct engagement of a powerful strain of space opera with this particular manifestation of global capitalism.  I begin my discussion with Samuel Delany and M. John Harrison and continue through C.J. Cherryh and Bruce Sterling, and then I delve into how New Space Opera crystallizes with Iain M. Banks, Ken MacLeod, Gwyneth Jones.  I conclude with an analysis of the vital cultural contributions of Caribbean New Space Opera typified by Nalo Hopkinson, Tobias Buckell, and Karen Lord. And the New Space Opera tradition continues to evolve. New Space Opera today continues to transform an ever-growing archive of genre conventions, tropes, and icons.

Jerome Winter completed his PhD in English at the University of California, Riverside, where he currently lectures.